Bi-directional organization of Microsoft Teams by IT and employees

Time and again, companies contact us describing a similar situation: The Microsoft Teams rollout has taken place and things are going differently than planned. There are problems that one had not foreseen and that prove to be counterproductive over time.

As a result, some decide to limit the use of Teams to the maximum and transfer all tasks to IT. But this path also has advantages and disadvantages.

We show you how to get out of the Teams dilemma: by organizing Microsoft Teams in a bi-directional way.

If you find yourself in a position where you’re in over your head with the Microsoft Teams application, there’s a safe way to bring structure and order to Teams.

With my-IAM TeamSpace, it’s possible to split the use and management of Microsoft Teams between IT and your employees.

Through multi-layer role management, a shared team administration is possible.

This in turn gives users enough freedom so that they can work practically and productively with Teams.

How does it work?

My-IAM TeamSpace is an innovation of FirstAttribute AG for Microsoft Teams, which is aimed at both admins and the user. As an integrated Teams app, it focuses, among other things, on the better and controlled administration of Teams. Due to the user orientation, the user is actively involved in my-IAM TeamSpace.

We do not believe in prohibitions and restrictions. But we see the usefulness of a regulatory framework in which to work with Teams.

Bi-directional organization as a mid-way solution

Perhaps you find yourself in this scenario: You want to get away from the confusing administration of Microsoft Teams (= everyone has been doing what they want so far) to an orderly process. At the same time, there are already structures in place now that you can’t throw overboard or shut down. You are not sure how to tackle the restructuring of Teams.

Teams can be organized bi-directionally in Azure AD, Teams and TeamSpace. You engage employees and your IT in the best possible way, and create order in Teams.

Our recommendation is to manage all teams via my-IAM TeamSpace. My-IAM TeamSpace covers all requirements regarding security, manageability, delegation, smart role management and user experience in Teams.

In principle, already existing teams from Azure can be easily integrated into my-IAM TeamSpace. My-IAM TeamSpace then takes over the future organization of the teams in Microsoft Teams.

But also a hybrid administration is possible: If administrators wish to maintain certain teams in the Teams Admin Center or directly in Teams, this can still be done. These teams are then simply imported into TeamSpace. Existing teams receive the “Only MS Managed Category” during the import. This category is not available for normal creation via TeamSpace.

This allows administrators to take over certain special cases or teams that should remain in their hands. 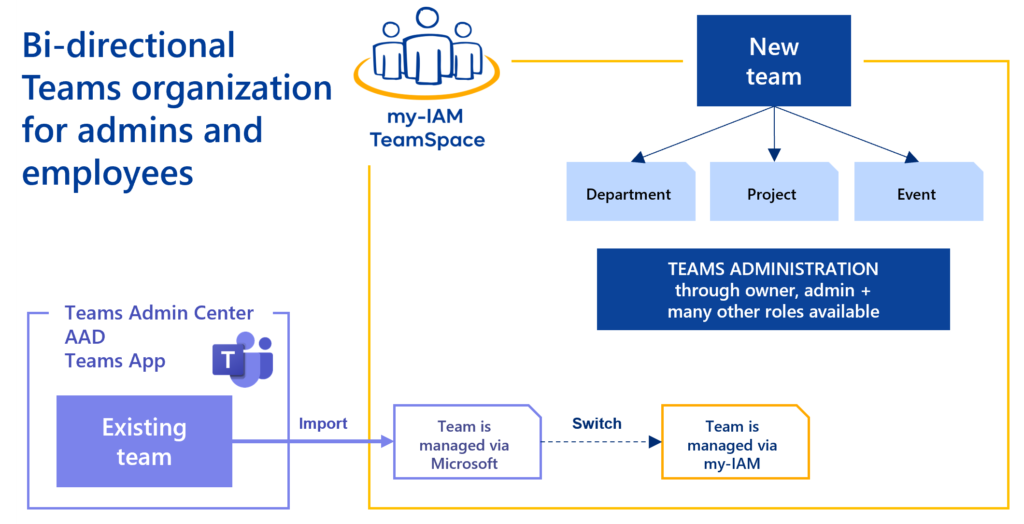 Instead of removing all rights from employees to regain control over Teams, with my-IAM TeamSpace employees get the ability to manage standard teams in Teams.

You are allowed to create and manage new teams via my-IAM TeamSpace in a controlled manner.

How is that possible?

The bottom line is that your employees continue to enjoy Teams. Just as it was intended to be. The limitations are thoroughly organized, but not noticeable on the front end for the less technically savvy employee.

Categorizations and security settings in my-IAM TeamSpace help to enforce standards that must be adhered to across Teams enterprise-wide, strengthening Teams Governance.

Ultimately, you as IT manager, controller or managing director decide which Teams organization suits you best. My-IAM TeamSpace makes this flexibility possible.

Do you wish you had a better way to organize Microsoft Teams? Do you feel stuck and are looking for a better way or a new start with Teams? We would be happy to advise you.

Learn more about FirstAttribute AG and our IAM solutions.

Microsoft promises that the data of customers from the European[...]

FirstAttribute AG releases a new version of my-IAM PeopleConnect, the[...]

An hospital group in the east of Munichrelies on the[...]